After attending graphic design programs both Bob (Penn State) and Beth (Moore College of Art) Emmott worked for the noted Philadelphia photographer, Seymour Mednick where we honed our skills in photography, design, lighting and problem solving. Our next step was opening our own studio at 913 Arch St. 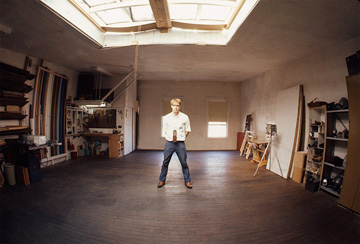 This was the early 70’s and advertising design and photography were riding high. Large studios located within easy distance of processing houses with their 2 hr. processing, supply houses which delivered background paper in 20 min and all the other necessary conveniences were the rule. Models dropped by daily showing their books and leaving head sheets and casting calls were a regular event. In addition to dark rooms where water ran almost constantly, studios had film loading rooms full of 4 x 5 film holders and reels waiting for 2 1/4 and 35 mm film (all of which was stored in the freezer). Art Directors and their clients were on set all day OKing a multitude of polaroids, and enjoying fancy lunches. It was hectic, hard work, busy and fun.

Our first studio had all of these, large shooting space, client area, dark rooms and model dressing rooms, prop storage and areas for set building. Only problem—it was our first studio and it was on the third floor, walk up, no working elevator. We started with a 35 mm camera and a wonderful wooden 4 x 5 Deardorff and their respective lenses, 2 Ascor strobe units, assorted hot lights, tripods, stands, clamps etc . To these we quickly added a Rollie 2 1/4 system and our first Calumet 4 x 5. We were happy, gained clients and a solid reputation for very good work. But the three flights of stairs, straight up weren’t working and the skylights leaked, so we moved on.

We worked out of 249 S. Tenth street while our studio at Front and Bainbridge was being built. That darkroom was in the attic and the shooting space limited but we focused on location jobs while the studio remodeling progressed. The new studio was a two story building with shooting space, set construction and film loading on the first floor, dark rooms and living space on the second. It was all very open with living and working spaces flowing together. Being on Front Street we had huge windows which looked out on the Delaware River with all its ship traffic, this was early Queen Village—an up and coming hot spot and we were called pioneers. 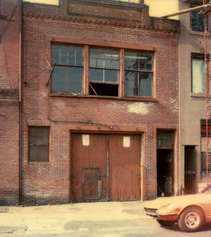 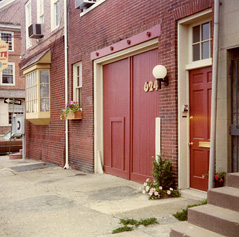 624 S. Front Street—Before and After

We separated work and living after three years and moved to Germantown to a large Victorian house while keeping the studio “in town”. (The open artist’s life lost it’s charm with a young child and the studio needed more space.)

Still needing even more space, in 1984, we moved to 700 South Tenth St. Again on the third floor but this time with an elevator. We quadrupled our shooting area, darkroom area had hall ways, we had offices and computers made their first appearance, (as office tools only in the beginning). We incorporated the business as Emmott Inc. All very photographer lofty, black leather sofas, Tizio lamps and oriental rugs. By now we had 8 x 10 cameras, more 2 1/4 equipment, and lots of strobes. Bob developed a form of photography we called “walking photography” where the 4 x 5 film was exposed at sometimes 8 different sets with 8 different cameras. The film was “walked” from one camera to another requiring 8 4x5’s. and lots of strobes. 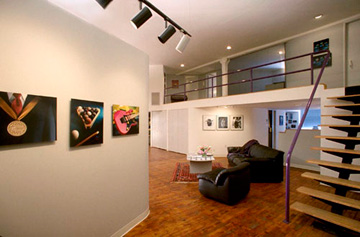 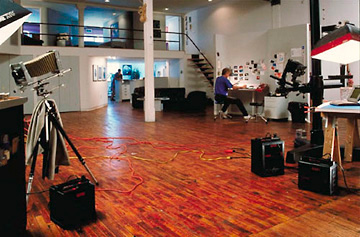 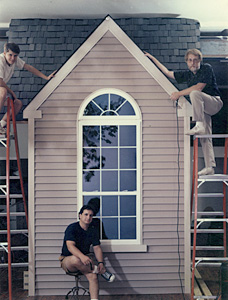 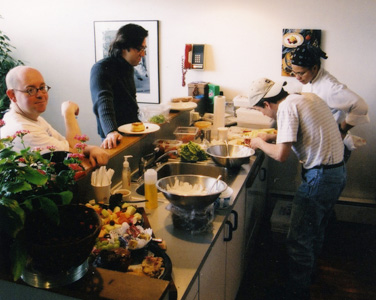 left: Bob with assistants, Joe Labolito and Kevan Emmott
right: Kitchen getting a work out as stylists and client prep for a food shot.

We invested in digital photography with a Leaf Volare system which cost over $35,000 not counting the camera and lenses. It was a three pop system which could only be used for still set ups in the studio but we were in on the ground floor of what would change everything. We added a digital 35mm camera. And in 1999 Beth created our first web page. 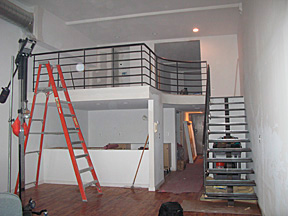 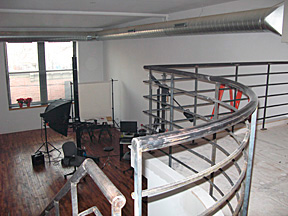 Started shooting as soon as the construction guys let us in... 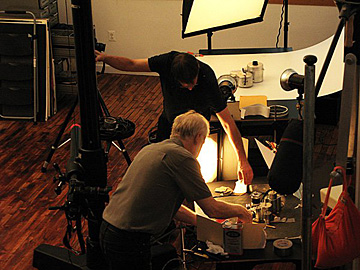 By then Bob had started to shoot video and spent more and more time editing. Many of our clients had gone to video to put product on line, so we got a green screen and motorized rail sliders and rotating tables and a steady cam. In 2011 we rethought everything. We sold the 4 x 5 and 2 1/4 cameras and the Leaf (kept the Deardorff). We sold the studio space and set up studio and editing rooms in the large Victorian house in Germantown. We have a large kitchen for food photography, quiet areas for editing and design work, ample shooting area and a yard. If we need a very large space we rent it. 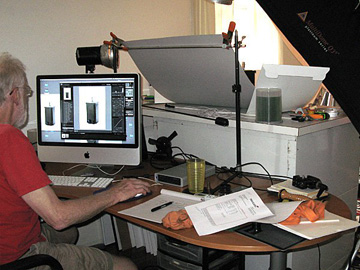 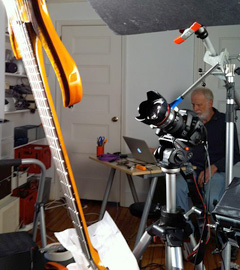 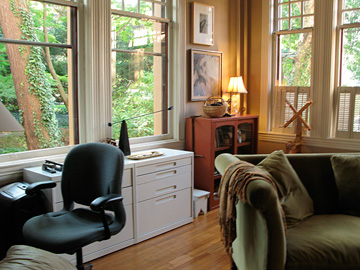 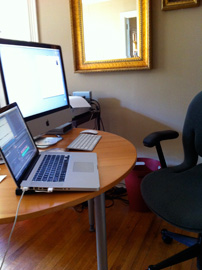 We are back to living on site and loving it—this time we have lots more space for both. And we still rely on our skills in photography, design, lighting and problem solving.